Alginate is a polysaccharide with a high molecular weight, occurring as insoluble salts in the cell walls and intercellular spaces of brown algae. Using local sources of brown algae Laminaria digitata (Phaeophyceae), it produces high quality hydrocolloid that provides a series of outstanding properties required in modern food manufacturing.

Alginate is one of the most versatile hydrocolloids due to its viscosifying, gelling, and stabilising properties under a variety of different conditions. The ability to dissolve and gel alginate without heating and control gel setting time very precisely by adjusting the calcium concentration with sequestrants is very useful. The versatility is reflected in the many applications making use of alginates, from technical applications to food and pharmaceuticals.

Alginate binds water very strongly due to the large number of carboxylate anions. The water binding capacity is most efficient at moderate to cold temperatures (below approx. 30°C or 90°F). This property remains strong even below the freezing point, resulting in freeze/thaw stability and reduced water migration (prevents ice crystal formation). Water binding at low temperature is efficient even under extreme shear conditions.

Alginate also synergizes both with pectin and proteins. The interaction between hydrocolloids and proteins is well known and used for a number of food applications . Typical examples are the stabilisation of milk protein with carrageenan and pectin. Interaction between charged polysaccharides and proteins are believed to be mainly of an electrostatic nature. This synergy may be used in various low/non-sugar fruit systems.

Alginate can be used in a variety of applications, including:

GRINDSTED®Carrageenan is a high molecular weight polysaccharide derived from Chilean red seaweed (Rhodophyceae). It is hybrid carrageenan which characterised by its natural content of kappa and iota units, that both are inside the same molecule.This is not equivalent to a powder blend of kappa and iota carrageenan as it supports a much more intimate interaction between the units which yields unique properties.

Carrageenan gels in the presence of potassium ions when the carrageenan is dissolved by heating and then subsequently cooled, resulting in the formation of a three-dimensional network. The carrageenan sulphate groups interact with the cations in the solution. One of the advantages of a carrageenan gel is its thermal reversibility, i.e. it can gel and melt again repeatedly only losing a little gel strength at each cycle. Gel strength depends on the concentration of potassium and calcium ions, the most important ions for gelling.

Carrageenan is used as a gelling and stabilising agent in puddings, flans, chocolate milk and other dairy products. It is also used in cooked ham and poultry, recombined meat and poultry products to prevent syneresis, reduce cooking loss and improve slicing properties, texture, and sensory appeal.In addition, carrageenan is used for special applications, such as toothpaste, photographic film, pharmaceutical products, and air freshener gels.

As a textural ingredient for food, GRINDSTED®Carrageenan can be used in a wide range of applicationswhere viscosity or gelling is required:

The word pectin comes from the Greek word pektos, which means firm and hard, reflecting the ability if pectin to form gels. Pectin is a carbohydrate with a high molecular weight which is present in all plants, primarily in the form of protopectin. Together with cellulose, protopectin forms part of plant cell walls and is, therefore, essential for plants and their structure.

Pectin today is commercially produced mainly from apple pomace and citrus peel by an extraction process followed by separation, purification, isolation, and then drying, milling, and standardisation. Commercial pectins are divided in two major groups: HE and LE pectins. The division is related to the number of ester groups in the pectin molecule and, thus, the functional properties. If the number of galacturonic acid groups in the pectin molecule is substitute by more than 50% methyl ester groups, the pectin is known as high ester (HE). If less than 50% of the galacturonic acid groups have been substituted, the pectin is low ester (LE).

The benefits of exclusive GRINDSTED®Pectin with outstanding qualities:

GRINDSTED®Pectin has been tailored to specific applications so that it can provide the appropriate functionality for each application: 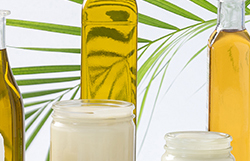 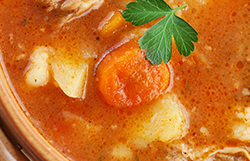 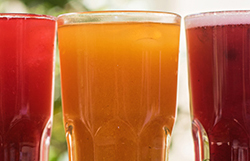 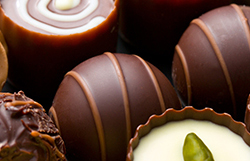 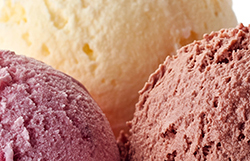